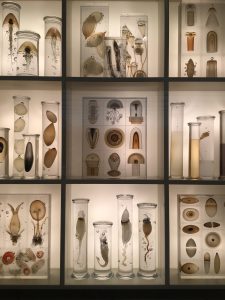 The Sultanette revisited this pesky question last week upon returning to her hometown, Madison, Wisconsin. You’re shocked that such a worldly dame hails from the land of curds and corn fields? Not only that, yours truly cut a swath from Our Lady Queen of Peace Elementary and Edgewood High School of the Sacred Heart to the godless University of Wisconsin before loading up the U-Haul and hitting the road. Chicago, New York, Paris. Any place but home.

So I was especially interested to read the Janan Ganesh Lunch with the FT interview with writer Edna O’Brien upon my return [FTWeekend 15 July/16July]. 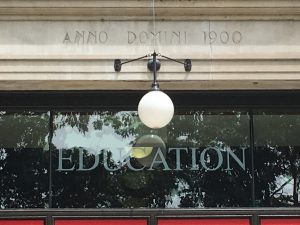 O’Brien fled craggy County Clare in the west of Ireland where she was taught by the Sisters of Mercy and raised by parents who banned the study of literature so she could concentrate on becoming a pharmacist. In response, she married a novelist, moved to London and became a writer. The closest she came to pharmaceuticals was dabbling in LSD.

Ganesh notes that her novel The Country Girls shocked the decorous fifties with its “scandalous insinuation that women quite like sex.” It concerns girls who escape a rural convent school for “a life of swish new clothes and romantic escapades in Dublin.” 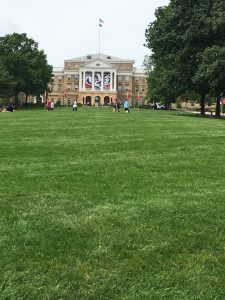 Not every country girl (or boy) who abandons the urge to stay mired in the expectations of others needs to escape to the big city. But geographical distance can help pave the way to self-discovery. Then again, you can blame home for not becoming who you are – wherever you are.

Referring to O’Brien’s 2012 memoir, Country Girl, Ganesh wonders if “pride in her defiance of those who sought to contain her – parents, church, spouse – vies with regret at her slowness to act.” She might have stood up a bit more in her early life, O’Brien responds, “but all things considered I was pretty brave … I would say, as regards my inner self, I am happier than I ever was … I am full of darkness, but I am also full of light.” 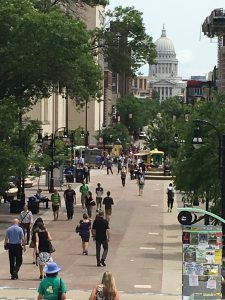 Which brings me back to the Madison walkabout. It was the kind of peacock-blue, cloudless-sky summer day that Wisconsin flaunts just to prove it isn’t all about twenty-inch snow drifts. My mission was State Street, that great street of boozing and schmoozing – main artery between the Wisconsin State Capitol where governing actually gets done, and the Library Mall where student protestors in the sixties did their best to undo it.

My excuse for returning was a high school reunion. The real reason was to crawl into the attic of my past and blow dust off the photo albums of my mind – research for a forthcoming book that weaves my life with a French woman writer who kept appearing in it. (If you’re patient and behave, you’ll all get autographed copies.) 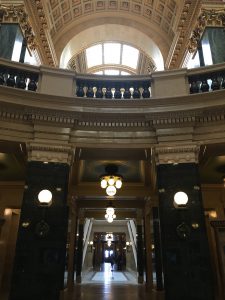 Since my hotel was closer to The Square I ducked inside the capitol first, my nostrils hit with the pungent aroma of the rotunda. Whatever that fragrance is – a mélange of musty 1917 state ledgers, floor polish, and aging cheese – it has been a sensual sensation since I was knee-high to a Badger. But enough childhood nostalgia. Time to trace the path to losing my virginity – or innocence anyway – when you’re raised Catholic, the hymen is last to go.

The nucleus for the 40,000-plus students at the University of Wisconsin campus is Bascom Hill, credited for giving every Wisconsin co-ed well-developed calf muscles. Since the beer and boys were at the bottom and classes were at the top, scaling it was a dally prereq. It was steeper yet shorter than I remembered, but memories of ascending it with a hangover in minus-twenty degrees worked up a hunger, so my next stop was State Street Brats. 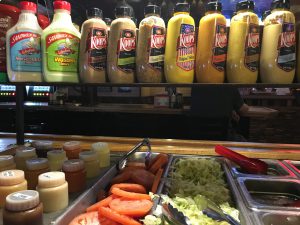 Curd basket anyone? Or the famous SmokeHaus BBQ Red Brat? Predictably, I chose the Ribeye Steak Sandwich “char-grilled to perfection” and delivered open-faced in case you doubted that it was extravagantly marbled with veins of fat guaranteed to slick the fingers with a coating of grease.

With blood coagulating in my veins, I headed back out to join the strollers and street musicians. In the 0.5-mile length of State Street I came upon a girl fiddling at “Madison’s Happiest Corner,” a guy strumming a guitar, a white-bearded unrecovered hippie playing the flute, and a bare-chested kid in shorts and shades playing a ukulele like it was 1999. Does Madison know the world has moved on from hippies and jamming on the street? Or does it choose to retain the endearing quality of living big and staying small?

When I moved on to the Chazen Museum of Art, I learned it contains 20,000 works that include “a diversity of world cultures and representative examples of the entire spectrum of art history.” There within its cool, clean galleries with floor-to-celling glass walls I came upon Andy Paiko’s blown glass installation, “Optic Twist Screen.” Its natural backdrop was created by the blue wash of distant Lake Mendota, one of five miniature lakes that make up the city’s character. I had experienced those lakes as a little girl with sand bucket at the local beach, and canoeing off the University pier, high on local pot with college mates.

What was happening to me? This place I couldn’t leave behind fast enough was provoking feelings bordering on sentimentality! Evoking an appreciation of a canny Madison modus operandi that appears to have weathered a world gone cynical and narcissistic. Did I pack some of that in the U-Haul when I fled? 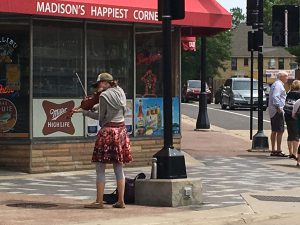 My final stop was the southern tip of State Street at the Library Mall – that campus landmark where the National Guard once fired tear gas on kids protesting war, civil rights, chemical companies, a country that could no longer believe in itself. I climbed onto the cement ledge in front of the Memorial Library (4,000,000 visitors every year) and watched students drift by on their way to summer classes.

A girl approached in T-shirt, cut-offs, flip-flops. The T-shirt read, “If it feels good …”. I waited for her to walk by, eager to see what clever punch line would greet me on the back. What aphorism I could take with me to New York. But there was nothing on the other side. I would have to find the answer myself. I sat on my ledge and soaked in the sun. Full of darkness. But also full of light.