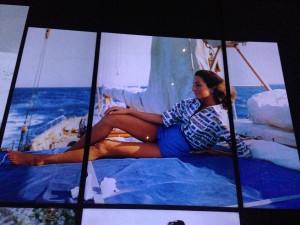 The introduction to the exhibition only fueled my animosity. It drooled of her “relaxed confidence and precocious sophistication” at once “noble and mysterious.” Avedon adored her nose. She was on Capote’s A-list of “swans.” Her profile was more photographed than the Taj Mahal. 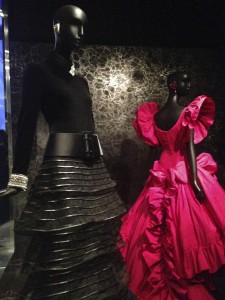 The red and the black.

But as each spotlighted mannequin emerged in the darkened gallery, revealing another side of de Ribes, I succumbed. “The fact is there are at least fifteen Jacqueline’s,” Carolina Herrera said of her, “all of them fascinating.” She knew who she was. Every one of her.

Jacqueline de Ribes was born on 14 July, 1929, anniversary of the storming of the Bastille. Her parents favored yachts over children. Her grandfather who doted over her died when she was nine. “He was the only one who loved me,” she tells Amy Fine Collins in her Vanity Fair profile, “The Last Queen of Paris.” With the outbreak of World War II, she and her siblings were shuttled with nanny and governess to safe havens outside Paris shared with occupying German troops. 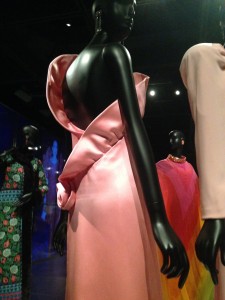 Backless but not tactless.

When she was eighteen she met Vicomte Edouard de Ribes whose ancestors had financed La Nuit de Varennes, the ill-fated attempt (depending on whose side you are on) at Marie Antoinette’s escape from the guillotine. Two years later she became Vicomtesse de Ribes and set about escaping the strictures of a bourgeois marriage and her reactionary father-in-law. She skied in Saint-Tropez, hosted black-tie dinner parties in the wing of her in-laws 19th-century Parisian residence, and dazzled the beau monde with her singular style. 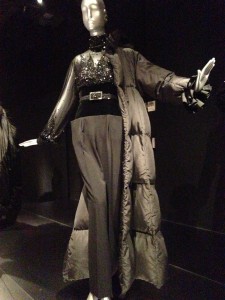 Dressed up goose down.

It was a successful arrangement. After sixty-two years of marriage, she tells Fine Collins, “To catch my husband is not easy. He thinks that he can’t catch me either. This is the secret of the couple. We love each other – but we agree we need independence. Sixty-two years with the same man is not so easy! It’s marvelous when you can manage to make it work. There are so many different ways of loving. How can you know someone is the best if you cannot compare? The French attitude of marriage, couples, love is complex.”

One distraction was the “Ball of the Century” – the masked Bal Oriental orchestrated in 1951 by flamboyant and filthy rich Charles de Beistegui. On the way to the event at Beistegui’s Palazzo Labia in Venice, hoards of invading Rolls Royce’s caused bumper-to-bumper traffic on Switzerland’s Passo del Sempione. 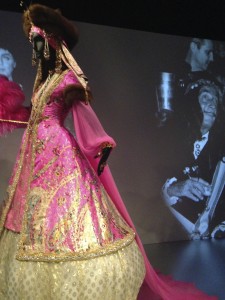 Among the thousand guests photographed by Cecil Beaton were the Aga Khan III, Barbara Hutton, Orson Welles, the Duchess of Devonshire and the Princess de Polignac. Dior and Dali designed each other’s costumes. Lady Diana Cooper showed up as Cleopatra. For those who appreciate men with hoses, a brigade of Venetian firemen formed a human pyramid in the grande salle.

Anyone care to sign up? But the glitterati wasn’t enough for de Ribes. Nor was Capote’s anointing her one of society’s swans. “The swans of the times of Truman Capote did nothing,” she tells Robert Murphy in a Bazaar interview. “They did not work. They didn’t fight for life.” At the Met show, she is quoted as saying, “I am not a lady who lunches.” 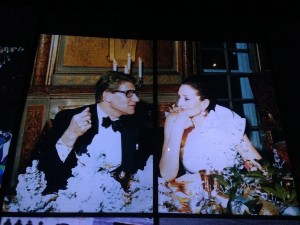 She had dipped a toe in the fashion world “apprenticing” for Cassini and Pucci. Diana Vreeland had arranged a photo shoot with Richard Avedon. Pierre Bergé and Yves Saint Laurent were confidantes. In 1956 she was voted into the International Best-Dressed List and in 1961 to the Hall of Fame. In 1982 on her fifty-third birthday, she informed the family that she was going into business as a fashion designer.

“Whatever I did in life it was against,” she tells Fine Collins, “Nobody ever approved.” The Sultanette can always get behind a contrarian vicomtesse. But as I took in the show, I grew to admire more than a spunky aristocrat’s metal. This babe knew how to put herself together. I liked … mea culpa! … the way she looked. 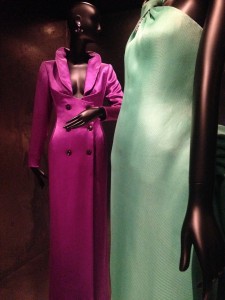 Today admiring a professional woman’s appearance is met with a flurry of reprisals: It’s politically incorrect, demeaning, objectifying! A man is never described by the clothes he wears! The fashion and beauty industries are in cahoots with craven media moguls to keep women enslaved to unattainable standards! A woman who wafts around the workplace like a female won’t earn the respect of male peers!

Who says? Maybe that works until a woman steps up, stops listening to chauvinists of both sexes, and reveals all – balls, brains, and bling. If she is subliminally judged by the men’s club, so what? Following the rules like good girls never got us anywhere. I’m not suggesting that a professional woman undermine her dignity. Only that she takes control of the definition. 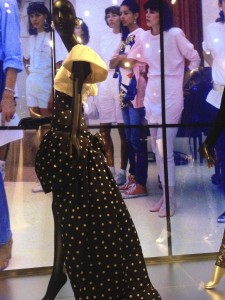 De Ribes’s haute sexuality was born of self-assertion. She exudes the enigmatic, intangible power of a female who follows her own rules. In all their back-slapping, gonad-bonding bravado men still find that confounding, perplexing, and baffling. They have been brought up as rational beings, poor left-brainers, perhaps that’s why they have so much trouble controlling their penises. 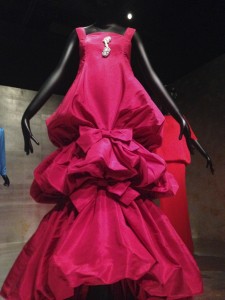 Yes, de Ribes existed in a milieu when a woman’s power was equated with her presence. Yes, women were shut out of male-dominated professions. Indeed, that right of entry has been, and is justifiably fought today. But if there is a war between the sexes does that mean we dismantle our nuclear allure?

Jacqueline de Ribes: The Art of Style closed on February 21. Vigée Le Brun: Woman Artist in Revolutionary France is hot on her heels at the Met until May 15. Look for The Sultanette’s CULTURE SNATCH to come.