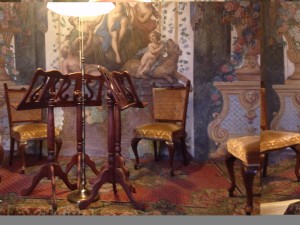 “A place of pleasure for body and soul.” Mozarthaus

They still dress up in Vienna! At the Musikverein, the gilded Neoclassic Greek temple to sound inaugurated in 1870, The Sultanette was put to shame among the goddesses that showed up on a random Thursday night for Mozart, Verdi and Puccini.

I was in Vienna last week on a fact-finding tour solely for your benefit, worldly followers. So join me as The Male Harem achieves what the Ottoman Empire and TripAdvisor could not – invade and conquer this illusive town of lusty charms. Now back to the threads at the temple! …

There was a Doris Day matching dress and coat ensemble, a Tina Turner-worthy number in a symphony of black leather strips falling from neck to stilettos – and lots of black lace in between. Lipstick was red. Bling was rampant. Making an entrance with museum shop bags after a day of  tourist schlepping, I went straight to my seat fearing the peacocks would have me banished for wearing ballet flats. 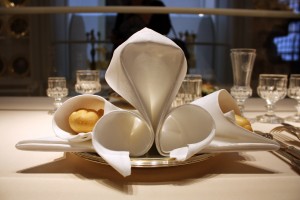 Quelle relief I wasn’t invited to a state dinner at the Chancellery where I would have been outdone by the napkins. Since the Hapsburgs ruled over Austria-Hungary, the Imperial Napkin Fold has been accessorizing the royal plate like a fascinator at Ascot. And if you learn the secret they’ll have to kill you because only two people know the technique which they pass on when they die.

I observed the Imperial Fold at the Sisi Museum, enshrined in a glass case surrounded by acres of silver, porcelain, and crystal for every courtly occasion. Sisi is the nickname of the Empress Elizabeth whose trademark diamond star jewelry, I snatched up in Swarovski at the gift shop for a less imperial price. 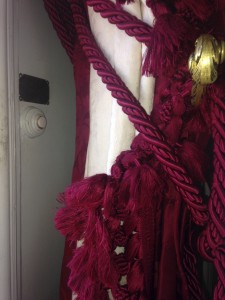 “Sisi, can I come in?” The bell the emperor rang for entry in SIsi’s chamber privé..

Known as Austria’s Lady Di, Sisi was a captivating beauty and fearless horsewoman. Or was she the defiant wife who deplored her evil mother-in-law, ignored her husband the Emperor, and neglected her royal duties after the murder-suicide of her son the Crown Prince? Or was she the obsessive narcissist who favored a uniquely bodice-strangling “tight-laced” corset that constricted breath and blood flow.

Like Sisi, the beauty of Vienna is exquisite and asphyxiating. Voluptuous and haughty. Resplendent and sad. But just when you feel constricted in the tight-laced manners, officious smiles, and patronizing gentility, all the clothes come off. 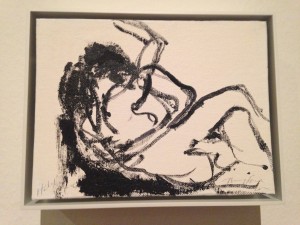 “Hold Me Anyway” Tracey Emin at the Leopold.

There are nudes galore at the Leopold Museum – embracing, fucking and full frontal. At the exhibition “Where I Want To Go” (April 24-September 14) artist Tracey Emin, referred in an FT review as the “new generation of feminists” credits her inspiration to brilliant bad boy Egon Schiele, who exposes himself on the walls in self-portrait. 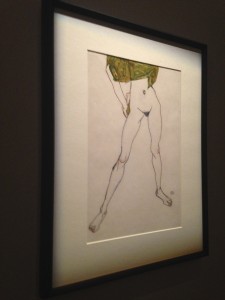 Love on the run? Egon Schiele at the Leopold.

The Viennese pretend it’s easy to find where you want to go.  “Just take a left and two rights and you’re there,” they assure. What they don’t remind you is that the city is a circle, so there is really no left or right, only tacking and jibing. When the kindly maître d’ at Purstner, home of the ultimate Weiner schnitzel, pointed this out I was especially grateful since The Sultanette had just consumed a slice of breaded veal the size of a Frisbee and was preparing to waddle back to the hotel. 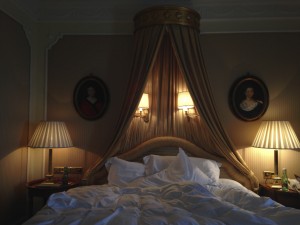 For the rest of my stay, I tossed the map and applied a life lesson: If you go in enough circles you eventually get to your destination. So when the concierge at the Hotel Daniel told me that the Belvedere Palace was just out the door to the right, I was dubious. How could that ponderous edifice share the same hood as my hotel, a cheery slice of eccentric chic and global goodwill? Travel Tip: Unless you’re lucky enough to have a night of sin at the sumptuous Hotel Imperial (The Sultanette cannot live on schnitzel alone!) there is no smarter spot than the Daniel for its friendly vibe, cheeky atmosphere and comfy digs. 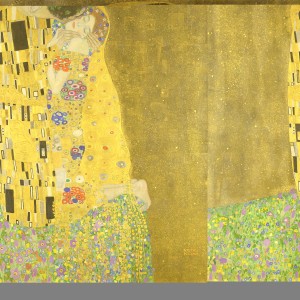 But on to the Belvedere which appeared just around the corner as predicted. I fired up the museum’s audio device and began the trek along its gilded walls, cavorting putti, and marble halls documenting Napoleon’s treachery and demise. (Speaking of dressing up, the Austrians love their armor, on display at the Bibliotek.) Nearly numbed by military regalia and missing the unembellished passion of entangled flesh at the Leopold, I wandered into the next gallery and there it was. Man embracing woman. The primal swoon. “The Kiss” by Gustav Klimt. 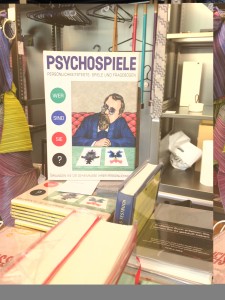 Sigmund at the MAK Museum.

I joined the crowd gathered around it like the Mona Lisa at the Louvre and punched in the audio device for some edifying art speak. But this city where Freud, Kafka and Wittgenstein parsed the meaning of sex and life in cafés that celebrate them to this day, was not about to spoonfeed predictable romantic pablum into a museum recording.

This Kiss, said the voice, represents sexual ambiguity. The woman’s face is turned away from her lover, not in ecstasy, but in conflict between submission and rejection. Say what? How could this love icon reproduced on notepads, tote bags, refrigerator magnets, scarves and umbrellas symbolize rejection! It wasn’t just a painting, it was a brand. And forget about the rest of the world, we Americans don’t like our brands tampered with.

Even the French treat us better in their City of Love! Unlike the Paris café where you are left alone to people-watch or read the Herald Tribune, the Viennese café demands due diligence. Choosing one begs a knowledge of which philosophers, writers, artists or profligates hung out where. A degree in military history is helpful when selecting your pastry, as in the Sacher Torte, created by Franz Sacher for Prince Metternich in 1832. And ordering coffee – brown or strong, milk steamed or frothed, cream on top, bottom or side –  requires cracking a Napoleonic code.

On my last afternoon, tired and hungry after taking in the ruins of Ephesus and four centuries of harmoniums at the Bibliothek, I limped past a shop window filled with fancy pastries. It was the Gerstner, appointed imperial court confectioner in 1873. While I yearned for Yankee comfort food that didn’t have a 200 year pedigree, I needed a sugar fix. 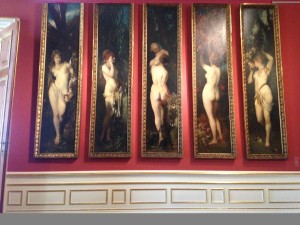 I entered the polished marble and varnished interior and took in a confounding display of museum-quality confections in a glass case. Too exhausted to discriminate, I chose a pink petit four for the price of Sisi’s crown jewels. Back out on the street, I peeled away its pleated paper doily and bit into the marzipan shell. The sensation was immediate and astounding. Between my fingers was a mini-wedding cake. Three tender layers of vanilla separated by three layers of creamy sweetness crafted to sensorial perfection for an emperor’s royal palate.

Vienna’s rigidity rankles. Its elegance intimidates. Its stunning beauty is always just out of reach. I had pursued it with cognoscenti, paramour, and incognito. I had invaded its concert halls, churches, castles, cafés, galleries and museums. Yet it had remained maddeningly unyielding. And then in one spontaneous moment of desire satisfied, I found Vienna melting in my mouth.