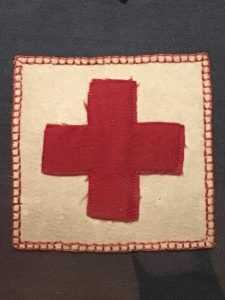 Is fashion liberating? Some say it encourages following the herd. But you won’t find a fashion victim on The Best Dressed List. That’s reserved for women who bend trends to fit their individual power, not the fashion police.

The history of feminism has been a story of good girls breaking rules and burning bras. We’ve always dressed, and undressed, for the revolution. So when The Sultanette learned of the exhibit, “French Fashion, Women & The First World War” at the Bard Graduate Center on New York’s Upper Westside, I put on my stilettos and sprinted across town for a look.

I had gotten a sneak preview at The National Arts Club in Gramercy Park, where co-curator, Maude Bass-Krueger, gave a lecture on the exhibit to the club’s dedicated followers of fashion. Illustrated with enticing images of the show’s vintage clothing, her presentation traced women’s emergence from suffocating layers of lacy feminine pretense to the satiny-sleek deconstructed look of the flapper. 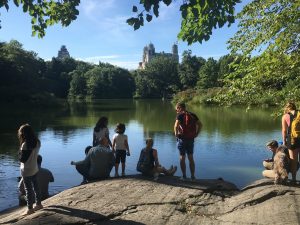 The next Sunday, on one of those rare autumn weekends when New Yorker’s set aside their cell phones to commune with nature, I engaged in some Central Park reconnaissance on my way to the Bard Gallery for a walk through wartime France.

Colette was there to greet me. “War?” the exhibit quoted her as saying in August, 1914. “Until the end of last month it was just a word, impossibly grandiose.” Added to the shock, the opening salvo of World War One fell in the middle of the Paris fashion shows. War is hell. 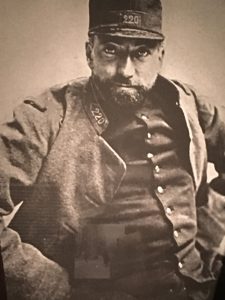 Poiret at war. Photo from the Bard exhibit.

Over three floors, the exhibit demonstrates how the French fashion industry fought to maintain its premiere position throughout the war. Movie theatres were closed but fashion houses remained open. Couturiers like Paul Poiret were mobilized but he continued to take care of business from the front.

The prewar “lampshade” look was replaced with a less restricting crinolline de guerre. And because a woman of means was no longer expected to change five times a day to accommodate wardrobe-prescribed activities, the tailored suit was born. 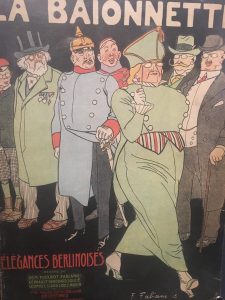 As the war slogged on, the slaughter climbed to horrific numbers, morale hit bottom, and the economy took a dive, the fashion and textile industry prevailed, employing one-third of the working population. When the Germans tried to appropriate France’s fashion sovereignty with counterfeit magazines featuring looks stolen from Parisian fashion designers, the attempt was met with caricature and derision. 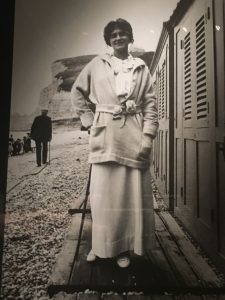 The war also launched the couture career of a little-known hat designer whose millinery store on the rue Cambon had begun to attract attention. When her loyal clientele encouraged her to design clothing for them, Coco Chanel’s smart, practical wool jersey creations made a splash in her first boutiques at Deauville and Biarritz.

But the real impact of the war on French women began when the war ended. “In one week Paris was a changed city,” the exhibit quotes British socialite Lady Duff Cooper. “The streets were full of women dressed in black.”

The war had left 600,000 French women widowed but it had also claimed 1.3 million soldiers. While the traditional mourning period had lasted up to two years – the widow shrouded in black until a three-month “half-mourning” period allowed for some white clothing and jewelry – it was time to repopulate. 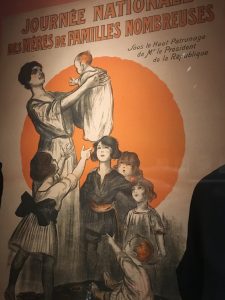 No longer needed in munitions factories, it was now a woman’s patriotic duty to be a baby factory. “France needs children,” reads a poster in the exhibit for National Day for Mothers of Large Families. Get back on the market asap was the message, but not too enthusiastically. If a woman appeared too available she was known as a “bad widow” or worse, a “merry widow.”

But not all French women were ready to report to the baby production line after a whiff of freedom. And this might be when women and fashion became most complicit. The Roaring Twenties, known in France as the Années Folles (Crazy Years) was as much female statement as fashion statement.

“Fashion now favored androgyny,” the exhibit notes, “and encouraged women to deemphasize their hips and breasts. The image of the ‘garconne’ became the template for the modern woman, who was to be both sexually and economically independent.” Suffrage was yet to come but women were voting for their freedom – from acres of lace and multiple daily costumes changes to a look that fit new life choices.

It took a war to change women’s fashions and attitudes. And now we can change our morals, our partners, and our sexuality. It doesn’t take the latest Chanel for that. It takes courage to be who you are. To ignore the voices that still inveigle and coddle us to comply. So what are you wearing to the rest of your life? C’est la guerre. Are you dressed for it?